Both the “Growing Pains” editorial and AK Thompson’s review of Richard Day’s premature announcement of Gramsci’s demise ?(UTA 3) put into words what I have tried so hard not to say. Both pieces, in their separate ways, forced me to confront what I’ve been in denial about for too long. But there it was. The movements from which we derived such profound inspiration, the movements that swept us up in dramatic mobilizations in Seattle, Quebec, and all over the world on the eve of the Iraq war, are not what they used to be. It seems like we’re living through a profound state of retreat, or even an overall downturn in struggle. Although this was not the main argument in either the editorial or the critical review, it was a basic assumption underpinning much of what they both said.

To my mind, UTA is an ideal place to discuss and debate the character of the period of struggle in which we now find ourselves. 2007, the year of uncertainty: is it an upturn like the sixties, a downturn like the 1980s, or is it somewhere in between like much of the 1990s? Or maybe it is a combination of all of the above, with various movements fragmenting and occupying various points along the axis of mobilization and demobilization. Figuring this stuff out would allow those of us working in movements to make better political and strategic proposals.

Like Thompson, I’ve often felt the heartbreak of having to live on the waning side of the 1999-2001 high point of resistance. I hate that we have entered a long period of demobilization prompted by the state’s backlashes against our movements and aspirations in the wake of 9/11. Nevertheless, unlike the assumptions of the UTA editorial, I still cling to the hope that our movements now inhabit some kind of in-between, transitional period. Further, I believe that we must acknowledge that such a period is not always or necessarily followed by total downturn. I think the editorial correctly identified the death of the Canadian anti-globalization movement and the drawbacks of the anti-war movement. However, I don’t think that this means that we have therefore re-entered a period of political struggle comparable to the dismal 1950s or 1980s. And, even in those moments, when resistance became a shadow of its former self, we must remember that the struggle continued. It had to and has to.

The character of the political period is determined by the combination of the agency of activists on the one hand and the structure of political opportunities created by State and capital on the other. The point of discerning the political period’s character is two-fold. We want to make the most effective use of our movement’s capacities, and we want to understand the possibilities afforded to us by the alignments and fissures that cross the hegemony of the “war on terror.”

Figuring out the character of our current political period is the central task of anyone interested in reversing the fortunes that have befallen our social movements. Our assessment of the dynamics of struggle and of the period in which we find ourselves is a crucial prerequisite to any discussion concerned with strategy or tactics. For my part, I’m ready to look it in the eye. It’s time to debate the state of things. In fact, the death of the anti-globalization movement and the coma into which the anti-war movement has lapsed scream for us to do so.

We need to arrest our current slide into disorientation, pessimism, fragmentation, demobilization, and disengagement. With the possession of a clear analysis of the character of the political period, we will be in a better place next time we are all lucky enough to stand together on the streets of the next Quebec City or Seattle. Until then, I am confident that UTA will continue to provide an important reference point for those of us aiming to figure out what kind of beast we’re dealing with. 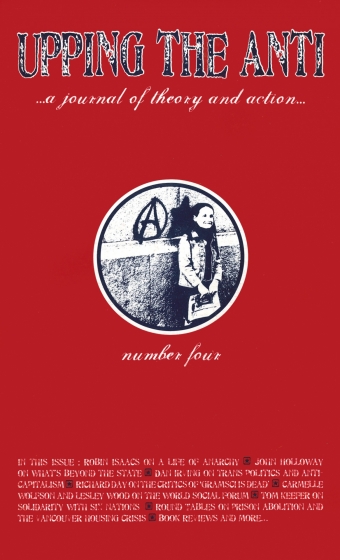