Dear UTA, The editorial in the last issue of Upping the Anti (“Becoming the Enemy They Deserve,” May 2007) posed the paradox that was also at the heart of Rebuilding the Left in the fall of 2000: serious cracks have developed in the legitimacy of capitalism, yet the de facto political crisis is not on the right, but on the left. If the ultimate explanation the editorial offers for this paradox – the left’s organizational limits – is in essence the same starting point as the “short-lived” RTL, this is not discouraging. It is, rather, exciting to see a new generation of activists “up the anti” in this way, all the more so alongside the impressive overview provided of the failures of my own generation. Having no fundamental disagreement with the editorial, I’ll only add some observations as part of the discussion/debate for which it called.

The retreat of many of the new movements from crucial organizational questions is, as the editorial suggests, part and parcel of the hesitancy of many activists to directly address state power. But this is more than a matter of anti-statist biases; it seems to stem equally from a populist confusion over exactly who or what the enemy is. What passes for “anti-capitalism” within the movements is often a mixed bag of being against some combination of big business, multinational corporations, US corporations, financial capital, free trade, neoliberalism, and so on – none of which add up to ending capitalism as a social system. Coming to grips with what exactly we’re fighting against (and for) sheds light on the scale and scope of the barriers we face and helps make it clear that we can’t avoid questions about how to organize ourselves, who we need on our side, what issues we choose to focus on, how we articulate our cause, and so forth.

On the other hand, activist suspicions of the traps of “seizing state power” are well-founded. We agree that the capitalist state cannot include the democratic capabilities we desire; the issue is transforming it into something new. That transformed state would not only represent us but be democratic in the fullest sense of a) supporting popular mobilization against the still-existing barriers to a democratic society within civil society (especially that of private control over production, finance and communications); and b) contributing to the general development of those popular capacities and decentralized institutions essential to defining and administering all aspects of daily life.

The special role of the labour movement – whether or not it leads in any new initiatives, no revival of the left can be sustained without the resources, organizations and strategic location of workers – highlights a particular dimension of the paradox flagged above. It is crucial to appreciate the extent to which neoliberalism, in sacrificing the stability of legitimating structures and policies, has evolved other effective mechanisms of containing dissent. This is clearest within the working class. The dependency of workers on capital has always acted as a limit on their radicalism and unity, and this has been materially deepened by neoliberalism’s intensification of “competitiveness.” The most despairing expression of this is unions on the one hand rhetorically denouncing the power of multinational corporations and on the other feeling that “they have no choice” but to call for subsidies, in the name of saving jobs, to strengthen “their corporations” – the corollary in ideological and practical terms of weakening workers and internalizing neoliberal values.

Moreover, people cope with material survival as best they can, and with the defeat of collective instrumentalities, this has led workers to act in individualized ways that internalize and reproduce neoliberal values and practices: more hours are worked by the “bread-winner,” families send more workers into the labour market, private debt grows, tax cuts are welcomed as gains in disposable income, private investments become necessary to offset the erosion of pensions, etc. As these forms of survival replace collective struggles – on picket lines, in the street, and via electoral contestation – collective capacities further atrophy. The inequalities created by neoliberalism’s greater uneven development within the working class itself add another debilitating dimension to its capacities for radical agency. In this regard, the editorial notes parallel tendencies within the tactics of the social movements that also reflect neoliberal structures and fragment rather than build cohesive resistance.

The above carries certain implications. Expanding unionization is not enough: organizing people into demoralized unions is better than nothing, but it is obviously limited since demoralized unions are unlikely to make the major breakthroughs into unionizing the remaining majority of the working class. Nor is it enough to put the focus on the democratization of unions. As central as this must be, democratic unions are not immune from making parochial and corporatist decisions. What we fundamentally need are networks of activists across unions developing a class and not a company perspective, and a vision that overcomes the neoliberal fatalism that has come to replace legitimation in limiting opposition. And alongside this, we need concrete policies that can be credibly fought for short of asserting that “the answer is socialism” – that is, policies which can be partially won within capitalism but that also inherently challenge capitalist power, build our power, and whose very incompleteness suggest more radical demands and strategies. None of this can happen without the influence of socialists with feet firmly planted both inside and outside unions – reinforcing the editorial’s insistence on building our organizational capacities.

The editorial is rather dismissive of NGOs because of their objective role in acting as a (low cost) safety net, for picking up the pieces that the neoliberal state has discarded, and because of their financial dependence on the state. However, it’s important to distinguish between agencies that simply provide a service and those that attempt to build some autonomous capacities. Further, while it is true that NGOs and related community groups may be inherently blocked from playing a directly radical role, the issue is whether their knowledge of specific working class communities, and the direct contacts they have at the base, can be potential assets to any left formation in the context of a larger project.

Finally, in starting to think through what tasks might be begun now, the most immediate organizational question does not revolve around how to take power, but how to systematically get the idea of an alternative to capitalism seriously on the agenda again and, especially, how to make socialists out of activists and militants. 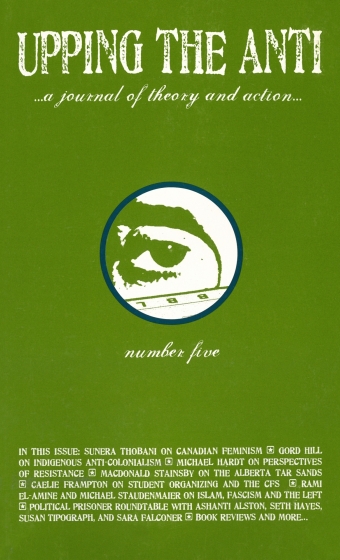