Rami El-Amine has done valuable work challenging Islamophobia and the widespread demonization of Islamic-based political movements. But his “Islam and the Left: A Reply to Staudenmaier” in Upping the Anti #5 is a deeply misleading piece of writing. Not only does El-Amine misrepresent Michael Staudenmaier’s argument (as Staudenmaier pointed out), he also misrepresents my work, misrepresents the Three Way Fight blog (threewayfight.blogspot.com), and, more importantly, misrepresents Hezbollah.

El-Amine claims that Three Way Fight’s political approach “suggests that [Islamists] are essentially fascists,” and that this “plays into” the racist politics of those who advocate “wiping out the Islamists, even if it means supporting the worst imperialist atrocities.” But several of us at Three Way Fight have argued repeatedly that Islamic-based political movements encompass a wide range of philosophies and groups, many of which, including Hezbollah, are clearly not fascist. My August 2006 piece, “Defending My Enemy’s Enemy,” one of El-Amine’s main targets, emphasized that leftists had a responsibility to critically support Hezbollah’s resistance to Israel’s invasion of Lebanon, which I described as “a mass atrocity, a calculated, long-planned campaign of terror.”

In this and other writings, I have consistently argued that we should criticize but not demonize Hezbollah. As scholars such as Amal Saad-Ghorayeb have argued, Hezbollah (literally, the Party of God) embodies a contradictory mix of pragmatic pluralism and theocratic idealism. Unlike cultural totalitarians such as the Taliban, Hezbollah works with diverse political actors and does not enforce religious law or special strictures on women in the areas it controls. But the party still embraces Ayatollah Khomeini’s radically anti-democratic doctrine of rule by one supreme religious jurist, or al-Wali al-Faqih. It considers Ayatollah Khamenei, Khomeini’s successor in Iran, to be that leader today for all Muslims. Hezbollah remains committed to the goal of an Islamic theocracy, to be established by “free choice of the people.” As I’ve argued before, promoting oppressive, anti-democratic goals without demanding that they be imposed against the will of the majority is less problematic, but it’s still bad.

El-Amine’s response to this complex picture is to gloss over Hezbollah’s negative side and exaggerate the party’s positive features. He assures us that “Hezbollah gave up fighting for a theocracy long ago” and no longer looks to Iran as a political model. But Sheikh Naim Qassem lists belief in the authority of the supreme religious jurist – first Khomeini and then Khamenei – as one of Hezbollah’s “three pillars” in his 2005 book Hizbullah: The Story from Within. Qassem, who is Hezbollah’s deputy secretary-general (not secretary-general, as El-Amine labels him), also praises Iran’s political system for its freedom and openness.

To help obscure the fact that Hezbollah is still formally subordinate to Iran’s supreme leader, El-Amine exaggerates the party’s ties with the “liberal” cleric Ayatollah Muhammad Hussein Fadlallah, falsely describing him as the party’s current (or, elsewhere in El-Amine’s piece, former) marja, or spiritual leader. As Lara Deeb notes in the article “Hizballah: A Primer,” both Fadlallah and Hezbollah have always denied this relationship, and Fadlallah has argued – in flat contradiction to Hezbollah’s core principles – that religious scholars, in Deeb’s words, “should not affiliate with a single political party or be involved in affairs of worldly government” (see www.merip.org/mero/mero073106.html).

El-Amine also dodges the question of Hezbollah’s hostility to Jews, claiming that Arab anti-Semitism simply rises and falls in response to Zionist expansionism. While that’s certainly a contributing factor, it doesn’t explain why some Arab opponents of Zionism demonize Jews and others don’t. Blaming Zionism alone strips Middle Eastern people of historical agency and also ignores the deeper roots of anti-Jewish bigotry in Arab and Muslim cultures. Saad-Ghorayeb’s Hizbu’llah: Politics and Religion (2002) documents that the demonization of Jews is integral to Hezbollah’s ideology, goes well beyond the party’s opposition to Zionism, and is reflected in Hezbollah’s reading of the Qur’an.

El-Amine is right that “Islamist” organizations differ significantly in their policies on women (a point Three Way Fight contributors have discussed several times), and on this issue Hezbollah looks moderate compared with the Taliban (as do most political movements). But El-Amine is quite wrong when he claims that “the level of involvement of women in the day-to-day activities of each group serves as an indicator of how supportive they are of women’s rights.” Women participate actively in many misogynist formations, from Christian rightist anti-abortion campaigns in the US to Hindu nationalist anti-Muslim pogroms in India. Algeria’s Islamic Salvation Front included and organized a large network of women activists but the Front also murdered women who appeared in public without the veil.

Hezbollah’s political campaign against Fouad Siniora’s government has mobilized broad support from Lebanon’s poor and working-class people angered by the government’s pro-business, neoliberal policies, as El-Amine tells us. He doesn’t mention that Hezbollah helped Siniora’s coalition to win the 2005 elections, when those pro-business loyalties were in plain view, and that the party held two ministries in Siniora’s cabinet for over a year. Hezbollah’s subsequent break with Siniora and alliance with General Aoun’s Free Patriotic Movement has more to do with maneuvering for power than any principled commitment to “supporting workers and the poor with more than just rhetoric.” As El-Amine admits, Hezbollah doesn’t even have an economic program.

El-Amine’s one-sided portrayal of Hezbollah reflects one of the main illusions that Three Way Fight was designed to combat: the idea that anti-imperialist forces are inherently progressive. The Iranian revolution discredited that idea almost 30 years ago, but it’s still common on the left. Three Way Fight highlights the rise of diverse movements that attack global capitalism or conventional bourgeois politics from the right, seeking to establish some different kind of oppressive order. Fascism is a useful reference point for making sense of these movements, but not all of them should be labeled fascist. Fascists are right-wing revolutionaries, among other things. Hezbollah, as El-Amine notes, is reformist, which means it promotes a vision of change but doesn’t fundamentally challenge Lebanon’s established political framework or socio-economic order.

Three Way Fight contributors don’t agree on a single definition of fascism, although we’ve published or discussed several. J. Sakai, whose work helped inspire the Three Way Fight blog, has defined fascism as “a revolutionary movement of the right against both the bourgeoisie and the left, of middle class and declassed men, that arises in zones of protracted crisis.” More recently, I proposed, “Fascism is a revolutionary form of right-wing populism, inspired by a totalitarian vision of collective rebirth, that challenges capitalist control of the state while defending class exploitation.” For space reasons, I’ll say just two things about Stefan Durand’s “thorough definition” that El-Amine quotes at length. First, reducing fascism to a laundry list of specific features from the 1930s (corporatism, expansionist nationalism, a cult of the charismatic leader, etc.) ignores fascism’s dynamic, evolving character (Durand’s definition would exclude many of today’s neo-Nazi groups). Second, religious far-rightists who use modern technology and organizational strategies to implement a comprehensive, absolutist vision of cultural transformation have far more in common with fascism than they do with “medieval obscurantism.” Like the Taliban (or Christian Reconstructionists in the United States), 1930s fascists claimed they were purging modern corruption and restoring ancient glories, while promoting a totalitarian social order that had never existed before.

El-Amine is correct that the left’s disintegration has helped make “Islamists” – of various stripes — the main opposition force across much of the Middle East. To say that this is a political tragedy doesn’t mean we should stop opposing imperialist aggression and brutality. It does mean we need to move beyond simplistic us-versus-them models of power and resistance. 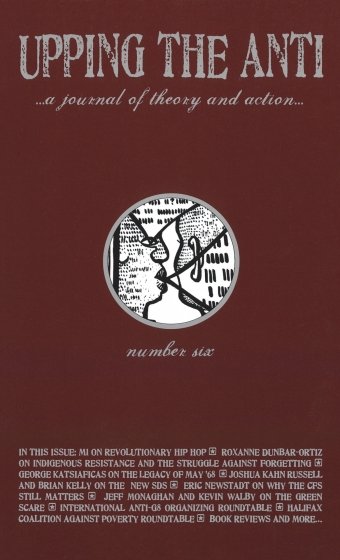