Thank you for printing an article on the Green Scare. Monaghan and Walby are absolutely right to call our attention to this “suppression” of radical animal and earth liberation activists, both because of the general need for solidarity against state repression and because of the potential it offers for stronger coordination among broader constituencies of revolutionaries. Such solidarity has been growing in the United States, where older activists supporting the San Francisco 8 (ex-Panthers being prosecuted on 35 year old charges) and younger militants opposing the Green Scare have been working together on campaigns against repression. Likewise, “Operation Backfire” political prisoner Daniel McGowan has consistently worked to deepen these connections among his supporters and through his writings, just as political prisoners from other movements have extended their support to eco-radicals.

To better achieve this cross-movement solidarity, I think we need a deeper discussion of strategy and politics – of what animal and eco-activists and the Left have to offer each other and what obstacles might have prevented solidarity thus far. The anti-imperialist Left has much to learn about sharing and preserving the planet, and environmental justice is a frontline concern for anti-capitalist struggle and planetary survival. The animal rights movement similarly helps us think about the interconnectedness of all life on the planet, the murderous effects of capital, and how we might act with greater conscientiousness in fashioning the world we want to live in.

But contradictions within the animal and eco-movements have been part of the barrier to the development of this solidarity. These obstacles are neither insurmountable nor one-sided, so it is worth examining them to help expand revolutionary possibilities. Briefly, there are three main issues that might help us think about how best to build cross-movement solidarity: capitalism, the state, and militancy.

While actions by groups like Stop Huntington Animal Cruelty (SHAC), the Animal Liberation Front, and the Earth Liberation Front have caused millions of dollars in damage, it is not at all clear that these formations or the movements from which they emerge are anti-capitalist or even leftist. Despite a decentralized structure and an occasionally stated dislike of capitalism, neither of these movements (individual participants notwithstanding) have a deep ?or articulated analysis of exploitation as endemic to a capitalist system. This situation has created movements that are tactically militant but politically amorphous and has contributed to a general separation of these movements from much of the Left. These movements are decidedly anti-corporate, but they often consider themselves to be “beyond” Left or Right. Attempts to forge solidarity must include a concerted effort to articulate environmental programs as part of the Left. This necessitates work from both the eco and animal liberation movements (to advance their work as part of a revolutionary Left agenda) and from traditional sectors of the Left (to incorporate the natural world and non-human animals into our critique of and organizing against empire).

Similarly, there is no analysis of (or shared politics around) the role of the state. It was this in part that led to the government’s chilling ability to turn most of the “Operation Backfire” defendants into informants. As with their anti-capitalism, the anti-statism of animal and eco-liberation movements is often more ephemeral than analytical. Combined with the relative political isolation most defendants in the Operation Backfire case faced even prior to their arrest, the absence of a strong position against state power left several people in a position where the threat of long sentences proved to be a deeper motivating factor than stiff opposition to the state. The non-cooperating defendants and their supporters are to be commended and supported for their principled stands, which have been the basis for burgeoning coalitions in recent years. Through their example we can see that just as the Left would benefit from understanding the environmental cost of capitalist accumulation, so too would the animal and earth liberation movements be strengthened by embracing a revolutionary program and all that it entails (for example, principled opposition to state repression and coercion; an analysis of capitalism, imperialism, and oppression; a commitment to organizing with an alternative vision of society). As Monaghan and Walby note and as the Grand Jury Roadshows on the West Coast have demonstrated, this is happening already. Even so, it’s an area where other sectors of the Left have much to offer. In order to do so, they will have to reach out to and work with animal rights and environmental activists.

Animal liberation activists and eco-radicals also seem to place a troubling emphasis on tactics over politics. Monaghan and Walby, correctly note that laws like the Animal Enterprise Protection Act will criminalize other movements that utilize tactics similar to those of SHAC – but the very idea of home demonstrations comes from the anti-abortion movement, which historically has exhibited a similar combination of tactical militancy and political purity (even if they have not been repressed nearly as much as SHAC and company). Militant tactics have become so prominent among animal and earth liberationists that they obscure central questions of politics beyond a shared antipathy to the corporate ravaging of the earth. These tactics have often been creative and have displayed the potential of militant action in periods of low mass movement. The confrontational style of SHAC and others reminds us of the risks we need to take in order to be effective. They have exacted a higher toll against oppressive institutions than most social movements in recent past. But “militancy” can substitute the creative potential of destruction for the need to organize. The challenge – for the Left as well as animal rights and eco-radicals – is to join a confrontational style with an orientation based on mass organization. This is a longstanding debate, of course, and we need to figure out new avenues and models for exploring and achieving this balance.

These problems ought to motivate us to build connections between the Left and the eco and animal rights movements with a greater urgency. This is so not least because it is precisely the ability of repression to separate “good activists” from “bad” ones and “legitimate political expression” from “illegitimate” forms that makes it so frightening and so successful. Solidarity is a messy process of exchange where we ought to both acknowledge and work through our differences. Knowing not only the potential for repression but potential stumbling blocks of our own making can bolster both our camaraderie and our strategies of resistance. 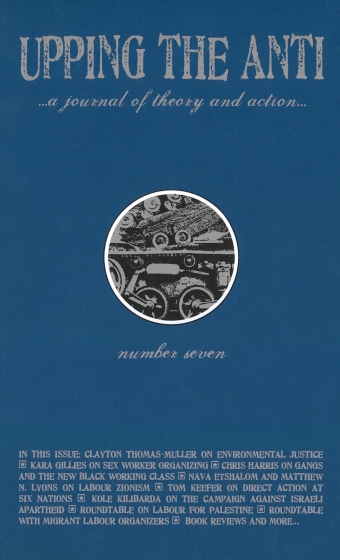