I would like to give a huge Nia:wen Ko:wa (thank you very much) to UTA for your continued attention to Six Nations’ struggles post-Reclamation. As both a Six Nations, Haudenosaunee-Tuscarora youth activist and a university student, it is useful and inspiring to see discussions of our struggle in the pages of your journal. On top of that, to read such a focused article on our struggle, Tom Keefer’s “Declaring the Exception: Direct Action, Six Nations & the Struggle in Brantford” (UTA 7), after the hype of Kahnestaton – the Reclamation site – faded away, is even more important. Other activists within various non-native organizations often ask, “what’s going on at Six Nations now?” “Is Six Nations still at the Reclamation site?” “I don’t hear about you very much anymore,” and so on. To be able to point people to your journal and to articles such as Keefer’s is very helpful in my organizing.

I would like to elaborate on and add some of my personal observations, insights, and suggestions to the discussion raised in Keefer’s article. To begin, the article gave a good overview of the current Six Nations struggle and the complex, unique dynamics that exist within it. The stress that Keefer placed on the need for solidarity between Six Nations and other non-native organizations and struggles is very much appreciated, as it is in fact critical to this struggle. However, there was one structural barrier to this solidarity that was not brought up explicitly in the article that I find crucial to point out: the effect of the continued marginalization and isolation of Indigenous issues.

It seems as though colonial powers have succeeded in marginalizing “Native issues” from dominant society to the extent that the left expects that only Native peoples are capable of being able to know, deal with, and engage with these issues. This is not something unique to Indigenous struggles as the same thing has happened to feminist, Black, Palestinian, labour, environmental, animal-rights, and other struggles. Our issues are separated, categorized, and marginalized as issues that need to be dealt with between “us” and “them,” and dealt with case by case, and independent of each other. It is exactly this type of thinking and these types of approaches that prevent solidarity from occurring in a true, lasting, and valuable way.

I see this happening not only within dominant society but also within academic settings. Indigenous issues are reserved for Indigenous studies and other “race”-based classes while other courses that you think should include Indigenous issues such as Canadian politics, International Studies, and Women’s Studies, for example, either brush-over or completely ignore them. This marginalization contributes to the alienation of Indigenous peoples within mainstream society while at the same time alienating non-native people from Indigenous peoples and our issues. In the end, we are left as divided and isolated peoples fighting huge issues on our own.

Furthermore, due to this marginalization there is a fear within non-native organizations and grassroots activists around engaging with Indigenous issues. For example, in a strategy meeting that recently occurred between various Native and non-native activists and organizations about 2010 Vancouver Olympics Resistance, a huge issue that kept coming up from the non-native activists was their “place” in this predominantly Indigenous struggle. They were scared that they would overstep their boundaries as “privileged” non-natives on an issue that, in their minds, should be Native-led. This fear led them to suggest that they should only work in a supportive role. This is problematic as it implies, in practice, that Native people are the only ones that should do the work in “their struggle.” This view not only fails to see and treat our issues as two-sided relationships, but it also fails to acknowledge the power, privilege and responsibility non-native “Canadian” activists have in organizing within their own country and against their own governments.

The lesson to be learned from this incident is that non-native activists should not let their fear of privilege or lack of full knowledge of Native issues prevent them from taking on these issues and organizing around them within their own communities and organizations. We must recognize that this marginalization is not something we can just blame on the state or media or some other over-arching entity. To some extent we all think of these struggles as separate, distinct categories and see the differences before we understand the similarities. So perhaps this calls for a new type of revolution of the mind and the lens through which we see these various issues – a revolution undertaken by everyone.

A final point and suggestion I would like to bring up that was not fully addressed in the article is the danger of focusing only on the struggle aspect of our movement and missing the need to focus on internal, long-lasting alternatives to colonialism. While external struggles with developers, corporations, and the Canadian government are important and even crucial to our survival as a people, an internal social movement of unity, healing and cleaning-house is just as crucial an undertaking for our peoples. Too often this internal aspect of our movement is overlooked in the crossfire of protests, occupations, police stand-offs, negotiations, and legal proceedings. What this does is create a movement that is merely reactionary and places the power in the hands of the oppressor. Also, given that Haudenosaunee traditions provide men with the responsibility of the external realm while women have the responsibility for the internal realm, it automatically overlooks or downplays the role, insight, and contribution of Haudenosaunee women. Given the extremely traumatic history of our peoples, we need to focus on both the external and internal aspects of this movement in order to become the healed, unified, sovereign nation we strive to be.

This need is already being realized within Six Nations with numerous efforts currently underway. This includes the current restructuring of the Haudenosuanee Development Institute (HDI) that Keefer mentions in his article. What was once seen as an exclusive and unaccountable faction within our community is now willingly undergoing a restructuring process undertaken by our entire community. This is a huge step forward in unifying our community. As well, the Six Nations’ youth movement, Young Onkwehonwe United (YOU), is trying to fulfil this internal need by organizing to unify and heal the nation through the gathering, inspiration and empowerment of youth. They have done this through such things as the 2008 Six Nations Youth Rally, their campaign to build a Six Nations Youth Centre, and organizing to gather Indigenous and non-indigenous youth for another youth-organized and run Six Nations Youth Rally in August 2009. As well, there has been a big push within Six Nations to hold clan meetings and return to other traditional Haudenosaunee practices for healing, unity, and long-lasting alternative solutions to colonialism. These initiatives offer much hope for the future of Six Nations’ struggle and show how we would do well to focus equally on both external and internal organizing in order to achieve our goals for future generations. 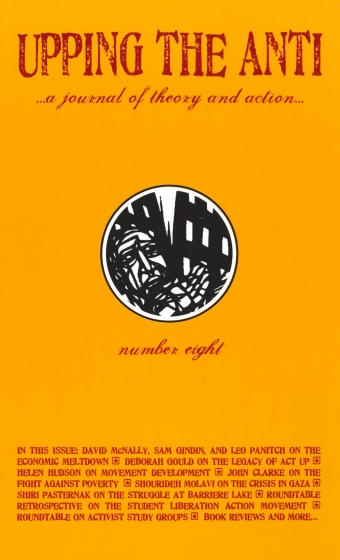