As part of the team working on ACT UP (the AIDS Coalition to Unleash Power) Philadelphia’s oral history project, we deeply appreciated Gary Kinsman’s interview with Deborah Gould, “AIDS Activism and the Politics of Emotion” (UTA 8). Gould’s insights have enriched our work and analysis. We also want to add to this discussion. We believe ACT UP Philadelphia can offer lessons about how it has survived and creatively risen to challenges detailed in Gould’s interview, continuing its energetic, ambitious pace of activism to this day. (For updates on ACT UP’s campaigns and actions, visit actupphilly.org and actupphilly.blogspot.com.)

At the beginning of her interview, Gould states that ACT UP ended in 1995, and throughout the article she discusses ACT UP as if it no longer exists. It is unclear when Gould is speaking about ACT UP/Chicago specifically and when she is speaking about ACT UP as a national, even international, coalition. This ambiguity is not unique to Gould’s remarks in the Kinsman interview – it is common in other accounts of ACT UP’s history. Certain ACT UP chapters have come to represent what, in fact, has been a vast, multi-dimensional movement. We believe examining the specific histories of different ACT UP chapters reveals a more complex picture from which we can glean lessons to inform our current AIDS movement. The various chapters of ACT UP have always been autonomous and distinct, although they may have worked together more closely in the early 90s. Today, ACT UP Philly works in coalition with the vibrant ACT UP Paris, ACT UP New York, and other AIDS direct action groups, such as Health GAP and Housing Works, to pull off dramatic protests for syringe exchange, housing, global access to medicine, and other issues. However, these groups are independent of each other.

Gould recalls that ACT UP (it seems that she is referring to ACT UP Chicago), at least in its early years, was generally a space where women and people of colour could raise issues of racism and sexism in organizing strategies and internal group dynamics. Interviews conducted in Philadelphia by Jessica Rodriguez and Pascal Emmer for the oral history project revealed that the Philly experience was different. Early on, ACT UP was perceived as a white group, in a largely African American city devastated by the loss of manufacturing jobs, the violence of the “war on drugs,” and state crackdowns on people of color-led leftist formations. By the mid-1990s, many long-term members had died or left, and the group was increasingly made up of HIV-negative white anarchists. Many of the interviewees discussed at length how the group tried to grapple with understanding racial and gender justice in the context of fighting AIDS. In particular, people credit the leadership of women for making the group’s work more effective along these lines. ACT UP knew that the AIDS movement needed to be led by people living with HIV and their allies, and to be rooted in the communities most impacted by the epidemic. It responded to these challenges in four ways that served to revitalize the group.

First, ACT UP Philly started meeting a direct community need by distributing clean syringes to drug users, at a time when this public health effort was illegal. Our city’s needle exchange provider, Prevention Point Philadelphia, emerged from this project.

Third, starting in 1995, ACT UP members built Project TEACH (Treatment Education Activists Combating HIV) to develop leadership among people living with HIV. Based in a local AIDS organization where many ACT UP members work and/or get services and medical care, TEACH offers a series of classes about the basic science of HIV treatment, making informed healthcare decisions, and how to get involved in the community advocacy and mobilizations that have won victories for the AIDS community. TEACH and TEACH Outside, which is for HIV positive people who are newly released from prison or jail, have developed a hybrid model of training and support rooted in AIDS activism, harm reduction, and community building. The initial curriculum was determined by local HIV positive leaders, the majority of whom were African American people of all sexual orientations who were current or former drug users. Almost every person of colour who has become a leader in ACT UP within the past ten years got involved through TEACH or TEACH Outside, and these leaders have taught us that the end of AIDS is something that can only be accomplished by working for racial and economic justice.

Fourth, the movement in the United States for global access to HIV medications was inspired by South Africans and largely built by Philadelphians. ACT UP mobilizes people in recovery houses who see international solidarity as key to understanding and fighting racism and exclusion from health care at home. As TEACH Outside instructor and ACT UP member John Bell told POZ magazine in 2001: “For addicts, this is 12-step work. This is a chance to put away your own issues and help the lives of those less fortunate… We have been preparing people for some time to be not only US citizens, but citizens of the world.” There has sometimes been tension in ACT UP Philly because of the limited time and resources to organize around both global and local issues, echoing the challenges of doing international solidarity work in other movements.

Another lesson Philly offers is the inspiring example of AIDS service nonprofits that have a symbiotic relationship with street-fighting activist movements. Several were built by ACT UP and continue to strengthen ACT UP’s base by training leaders, providing support groups, and meeting day-to-day survival needs of people living with HIV. Meeting people’s basic needs and teaching self-empowerment is necessary for political organizing to be sustainable for individuals. These nonprofits look to ACT UP to be the militants who fight for the community as a whole and to protect their own funding in particular. In March 2007, ACT UP stormed a meeting of Philly’s HIV Planning Council to defend TEACH’s funding. Some nonprofits try to silence activism when they think it puts their funding at risk. ACT UP continues to challenge this dynamic, creating activist visibility in the AIDS community and winning people over to an organizing model.

It often seems that our friends in other left movements no longer see AIDS as a grassroots issue and think that our movement has been totally absorbed/co-opted by the nonprofit/social work/public health sectors. But ACT UP Philly’s symbiotic relationships with some AIDS service organizations complicates the important emerging analysis of how the nonprofit industrial complex hurts our grassroots movements (for more on this, see “Open Letter to the Left and the AIDS movement” by Suzy Subways at kenyonfarrow.com/2007/07/11/open-letter-to-the-left-and-the-aids-movement/). The late Kiyoshi Kuromiya, a founding member of ACT UP Philadelphia, started the Critical Path AIDS Project (critpath.org/) in 1990 to put technology, particularly the early internet, in the service of movement building. AIDS activist groups like ACT UP Philly are still building a critical path that links the fight for life-saving care, treatment, and prevention resources with anti-capitalist struggles for racial and gender justice. Mass incarceration, gentrification, homelessness, sexist relationship dynamics, homophobic neglect of gay men’s health needs, capitalist profit in medicine, and imperialist extraction of wealth from the global South (for example, when the IMF demands that countries spend less money on health) are all issues that drive the HIV pandemic in the US and globally. We ask fellow activists working on these issues to learn about HIV and work with us.

One question we are exploring is to what extent ACT UP Philly’s survival has relied on breaks with the past and how much it has relied on continuity. ACT UP Philly now can be seen as a model of how to keep queer culture at the core of a group where heterosexuals are also comfortable being leaders. Although the impact of the AIDS pandemic itself is still huge, unfortunately it seems that AIDS activism has lost much of its sexy cachet that was rooted in the politics of radical queer liberation. And as founding members died, or left because of frustrations with the direction of the group, ACT UP Philly lost its institutional memory. As founding member Scott Tucker said, “memory is the radical capital of activists.” This institutional memory has been preserved and passed down largely through cross-generational friendships and mentoring among members.

As we’re thinking about ACT UP’s history itself, we’re also thinking carefully about how to represent this history, and to what ends. We are grateful for Gould’s valuable insights about the emotional dimensions of collective political action. We want to build on these insights, to discuss the ways in which talking about the history of our collective struggles is also an emotional and political act, especially when we’re talking about a movement in which so many people have died and where ideological conflict has been fueled by feelings of hurt and betrayal. If we are to understand the history of the ACT UP movement, the continuing survival and innovation of ACT UP Philadelphia cannot be left out.

Sincerely and with gratitude,
Suzy Subways and Pascal Emmer
Philadelphia 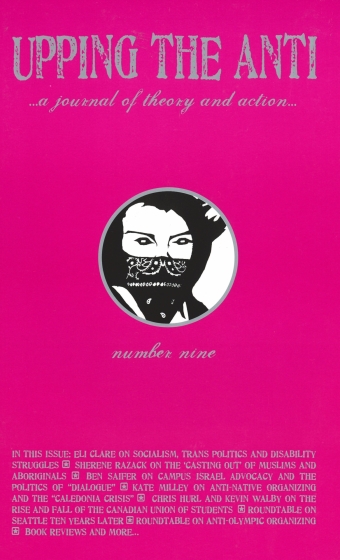