Thank you for your sustained love, resistance, and solidarity. We’ve been working hard to bring you some really exciting and thought provoking material to keep you coming back for more! It is with much pleasure and gratitude that we bring you Issue 18 of Upping the Anti: A Journal of Theory and Action.

It has been an exciting few months of editing articles and working on production. This past spring, we saw two important occupations in the city of Toronto. In April 2016, members of Black Lives Matter-Toronto (BLM-TO) and allies completed a 15-day occupation at the police headquarters demanding justice for murdered Black people. Andrew Loku, Jermaine Carby, and many others have been killed as a result of police brutality. The occupation occurred during the coldest weather in Toronto – yet they managed to hold the space for two weeks as communities across the country rallied to support them.

A few weeks later, we then saw a militant occupation of the Indigenous and Northern Affairs Canada (INAC) office as the Attawapiskat First Nation called a state of emergency in response to the nation’s suicide crisis. Allied with Black Lives Matter, Indigenous activists and other allies demonstrated cross-community support bridging anti-Black racism with colonization. In both occupations, various organizations, unions, and individuals rallied to support activists holding down the space. People provided hot meals, warm clothing and supplies, performances, numbers, letters of support, and on-site medical care. The connections forged during the weeks at BLM-TO Tent City and the INAC occupation show how cross-political and community alliances can be developed and maintained through direct action. With those Toronto specific actions, the editors continue to engage with and publish the lessons and histories of radical social movements, especially as activists experiment with different models of organizing.

Since our last issue, Canada has experienced a young, fresh-faced, Trudeau-style welcome to tens of thousands of Syrian refugees. Their presence has influenced a liberal settler-patriotism and compassion, as well as provoked the ire of many fascist elements of this society. While state massacres rage on in Syria, many borders across Europe have closed their gates in the face of an unprecedented movement of migrants from the all regions of the global south. Global upheavals have also occurred in growing numbers. In March 2016, approximately 7 million Brazilians marched in protest of the Rousseff government’s corruption amidst the country’s dwindling economic state. Thousands of students at Jawaharlal Nehru University mobilized against the growing Hindu nationalist movement that sought to try student union comrades under charges of sedition for their demands for Kashmiri azadi, dismantling the caste system, and freedom to political prisoners. Comrades, there is much to rage against!

In this issue, we address some of the rage-inducing issues facing today’s social justice movements. Because we recognize the toll of these struggles as well as the need to fight for something instead of always fighting against, we start off with our editorial on self care. After many engrossing discussions on this hot topic, members of the editorial committee all seem to agree on the need for our circles to (continue to) talk about both self care and community care to build, strengthen, and sustain our movements. It’s not easy to keep the struggle going, let alone do it without radical care, affection, and mutual aid.

In our interviews section, we start off with an interview with OmiSoore H. Dryden and Suzanne Lenon on their recent book entitled, Disrupting Queer Inclusion: Canadian Homonationalisms and the Politics of Belonging. This interview raises some important questions with how capitalist nationalism is reproduced in LGBT communities and how queer activists can disrupt these logics. We then have an interview with one of the founding members of Upping the Anti. In Chris Dixon’s interview with Sharmeen Khan on 10 years of UTA, she reflects on the successes and on-going struggles of maintaining an alternative, political publication. Finally, Salmaan Khan interviews Sandy Hudson, one of the spokespeople and founders of BLM-TO. In this interview, Hudson discusses the history of anti-Black racism and rise of Black Lives Matter in Toronto – from the murder of Jermaine Carby to the occupation of the police station in downtown Toronto.

Our articles section kicks off with Kris Hermes’ “Collective Action Behind Bars.” With the current year holding two national conventions for the Republican and Democratic parties, Hermes’ article looks back to different jail solidarity tactics during mass convergences. We also feature a piece by John Huot on “Autonomist Marxism and Workplace Organizing in Ontario in the 1970s,” which focuses on the struggles of rank and file workers against union the bureaucracy. Looking at how the New Tendency influenced the Canadian postal workers union, we see both the influence as well as the limitations to their organizing. We conclude our articles section with a piece by Annelies Cooper entitled, “The Interpersonal is Political.” In this piece Cooper unpacks the relationships of solidarity and mutual aid between settlers and Indigenous activists and pushes readers to think through what meaningful relationships could look like across settler-Indigenous activism.

Finally, in our book reviews section, Karl Gardner reviews Umair Muhammad’s book Confronting Injustice: Social Activism in an Age of Indivdualism. This review is focused on the importance of critiquing individual “lifestyle” activism and its replacement with collective organizing efforts. Then, Bob Eastman reviews The City is Ours, outlining the importance of squatting movements in Europe and North America. Lastly, Shane Burley looks at the rise of fascism by reviewing two books: Militant Anti-Fascism and Physical Resistance. Here Burley offers insight into how activists can understand the emergence of fascism and incorporate a diversity of tactics in their struggles against it.

After you get through some or all of this content, please consider writing us a letter about any topic that piques your interest or inspires great disagreement. If you are interested in submitting an article, book review, roundtable, or interview pitch for Issue 19, please do so by September 30, 2016. Thank you again for your continued readership and support. If you’re not already a subscriber or sustainer, please offer us some of your capital through one or both of those methods, or a one time larger than life donation. You can do so at uppingtheanti.org where you will also find submission guidelines and material from previous issues. If you’d like to join the editorial committee or advisory board or if you’d like to help out with the project in any way, please email us at uppingtheanti@gmail.com.

We are sad to say goodbye (for now) to former editors Robyn Letson and Amelia Spedaliere (who both remain involved on the advisory board) but are so overjoyed to welcome Karl Gardner, Niloofar Golkar, and Salmaan Khan to the editorial collective. As always, without the ongoing support and labour of our former and current editors and advisory board members, this work would not be possible. We are also saying goodbye and a heartfelt thank you to some long-time advisory board members who are moving on from the project: Irina Ceric, Mandy Hiscocks, Karl Kersplebedeb, Thomas Nail, and Adrie Naylor. Their involvement has been invaluable! Finally, we would also like to give a shoutout to folks who came by Sharmeen’s apartment to help with proofing and those who gave feedback on our editorial. Thanks to: Adrie Naylor, Kieran Hart, Tom Keefer, Gita Madan, Andrew Stokes, Thania Vega, and Shayla Chilliak. Also much gratitude to Daryl Vocat for illustrating this issue’s cover art (write us a letter about it!) and Simon Black for our ad art because the beauty of our movements should be reflected by beautiful art. We hope you enjoy Issue 18!

In struggle and solidarity, 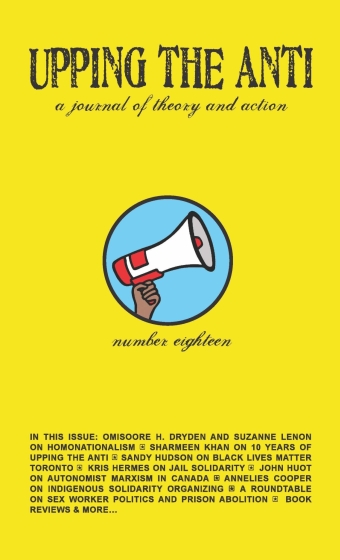